For a better experience please update your browser.

Your browser must have cookies enabled otherwise you will not be able to login or register. Please enable cookies in your browser and then refresh the page to continue.

Total booking fees comprise charges for IT services, credit card charges and/or other administrative fees allocated by the event organiser

In 2019 in a rare and true British first the UK Glima Federation introduced to the nation a fighting system which had never previously been taught here. The last time techniques from the system would have been seen was over one thousand years ago during the bloody age of Viking raids on our shores and the ensuing battles over land which continued for the next few hundred years. That fighting system, a combination of armed and unarmed combat is Glima - The Viking Martial Art.

Glima was developed on battlefields for times when close combat without weapons was necessary.   Weapons can break in the heat of battle, Iron swords may have been strong but they were expensive and the Vikings we’re not rich before raids, most were farmers, craftsmen and trades folk and so a spear or axe with a hilt of wood was a more affordable option than an expensive sword and certainly an axe would have been an everyday tool used and carried by most if not all.

Wood breaks under extreme pressure, blocking or parrying an enemy’s weapon for example could have rendered a warrior defenceless all but for his Seax, a type of long bladed knife, again a tool used for everyday tasks from crafting to hunting.   And so the ability to overpower and strip weapons from an armed foe or foes was essential for a Norse warrior’s survival on a distant battlefield far from home.

Back home away from the heat of battle a slightly less violent sporting version of Glima was practiced regularly, taught from a young age primarily to hone battlefield skills but also used for entertainment at gatherings in the same way we might watch a boxing match or other combative sporting event.   Glima for sport was also used to settle feuds between tribes without bloodshed, something which was essential to keep the peace in a time where honour ruled and laws didn’t exist.

As a Martial Arts System Glima contains blocks and interceptions against open hand and weapons, strikes, kicks, pain techniques, throws and takedowns, weapon stripping and usage techniques to disarm an armed opponent, grappling both upright and on the ground, locks and chokes.  It is as versatile as any of the best known and respected Eastern arts and as entertaining to watch as an MMA match.   In fact, if you imagine watching a Bellator competition, throw in some weapons and take away the ref, time limit and all the rules – That’s something like what you see in any Glima training camp or academy, which are almost always based outdoors, any day of the year.

Today in the UK we teach and practice Glima in two distinct ways; Sport Glima is the friendly version (and we do use that term loosely), primarily a grappling art with throws, takedowns, and pain techniques where the objective of any match is to ground your opponent as quickly as possible and be the champion by disengaging and being on your feet before them. And Combat Glima, the brutal battlefield evolved system which we teach today for the purpose of self defence. Whilst the weapons may have changed somewhat in the last thousand or so years from spears, swords and axes to baseball bats, broken bottles and knives which we see on our streets today - the techniques used to intercept them and overpower an attacker to enable an escape to safety have not. This makes Glima not only one of the oldest Martial Arts, but also one of the most effective self defence systems available today.

Glima then can be described as an ancient and comprehensive Martial Arts system used for sport and self defence which is as current and devastating today as it was over one thousand years ago. And in April 2020 the UKGF is looking to grow its Instructing team to establish the art further in the UK.

Join the UKGF in our second UK raid!

This series of Masterclasses will be taught by Grand Master Tyr Neilsen of the Academy Viking of Martial arts in Norway, and UKGF Chairman and Lead Instructor Alex Rogers. Training begins at an advanced level and so this Masterclass is not open to the public. If you are an experienced martial artist or instructor and either run an established gym or dojo or if you are an instructor looking to open a dedicated Glima Academy - this event is for you.

You will train with the most experienced and highly qualified instructors from both Norway and the UK in Sport & Combat Glima for five intensive hours per day for three days. You will take away a Level 1 Instructor grade issued by the UKGF and become one of only a handful of qualified British instructors in the art. You will be supported by the UKGF and your co-instructors in an art which has a lineage directly back to the Vikings and which exists today without politics in its day-to-day running. You will be free to build, open and run your Glima Academy exactly as you wish. Furthermore you will be supported with the UKGF grading syllabus so that you may teach your students while you continue to develop your own skills and progress your own grade level.

This is not a franchise opportunity and no further investment is required to the UKGF. The UKGF is a non-profit governing body created with the sole purpose of bringing Glima to the UK and expanding the capacity to teach the art and its rich history here.

Space on this Instructor Masterclass is limited, given the popularity of our previous event and the growing interest in Glima it is recommended that you book your place soon to avoid disappointment.

If you aren't ready to book yet but would like to know more about Glima from its rich history to its modern day application, UKGF Chairman Alex Rogers writes frequently on the UKGF Blog www.ukgf.co.uk/blog

Alex also teaches from Raven's Claw Glima - the first British academy ever formed, and trains 100% outdoors all year round. If you're local to the East Midlands and want to join the Raven's for a training session, get in touch via their Facebook Page @RavensClawGlima

Tyr Neilsen also writes regularly for the AVK Website and blog. Check that out at www.vikingmartialrts.com

Facebook, Instagram & Twitter pages for the UKGF can be found @UKGlima and if video is your thing you can watch everything from fights to technique lessons on Sport & Combat Glima on the UKGF YouTube channel here https://www.youtube.com/channel/UCtqpUUYJ4SiabwygEPlljhw

Any enquiry or question regarding this event is welcomed at info@ukglima.co.uk

This event cannot accomodate under 18's. Tickets are non refundable but are transferable. In the event you book but cannot attend you will be automatically transferred to the next event without charge or penalty. 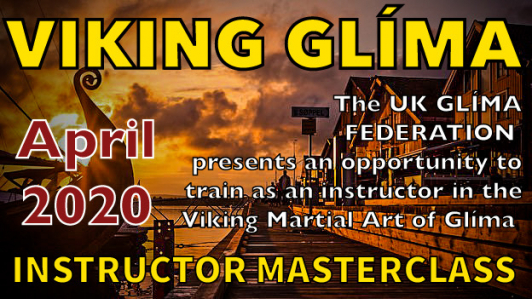